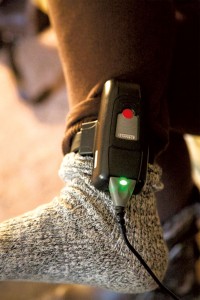 Tammie LaClair should be in prison. In September, she was arrested and charged with her fourth DUI. Because she was unwilling to post the $2,500 bail, the 47-year-old South Newfane resident was ushered to one of Vermont’s scarce inmate beds.

But rather than live in prison, at the cost of $180 taxpayers’ dollars a day, LaClair spends time with family, visits a therapist and is trying to rebuild a life that she says is strained by addiction. After only a week behind bars, and with her felony case pending, LaClair went home. But she is not exactly free.

Around LaClair’s ankle is a GPS-equipped monitor that transmits her exact location to law enforcement. She is the first participant in a technology-based pilot program for pretrial detainees that could potentially alleviate Vermont’s overcrowded and increasingly expensive prison system.

LaClair is under orders to stay inside Windham County’s borders — and inside her home from 7 p.m. to 7 a.m. Should she stray from her court-approved locations, or get close to a forbidden one, the monitor vibrates and transmits a warning to law-enforcement officials, who can reach her anywhere in the county within 30 minutes.