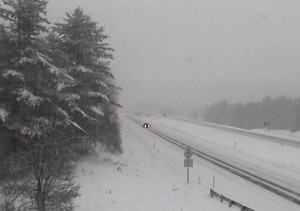 Wet, heavy snow began to fall in many parts of Vermont on Tuesday as the state prepared for difficult driving conditions and possible power outages.

The Adirondack Mountains almost disappeared as a blanket of snow headed toward Burlington over Lake Champlain early Tuesday afternoon. However, snow did not immediately stick in the city.

A winter storm warning was in effect for much of Tuesday, and it was set to last until 5 p.m. Wednesday in most of the state.

Road conditions in most of the state as shown by a 511 Vermont map online at 7:30 p.m. Tuesday were classified as difficult. Chittenden, Essex, Franklin, Lamoille and Orleans counties remained under fair driving conditions.

Vermont 9 between Bennington and Wilmington was closed at about 5:30 p.m. Tuesday due to multiple tractor trailers stuck, the Vermont State Police said.