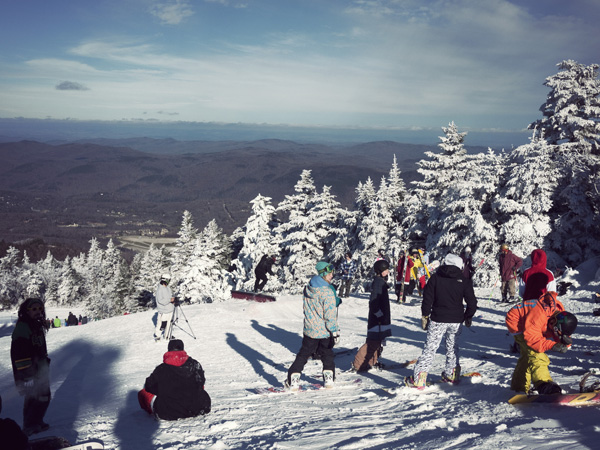 (NECN: Jack Thurston, Barre, Vt.) – After this weekend’s snowstorm provided the first significant accumulation of the season, several recreation-related industries in tourism-dependent Vermont were cheering. Snowfall totals varied greatly around Vermont, from around three inches in several towns near Burlington, to as many as 17 inches in the Rutland County town of Shrewsbury.

“This is a blessing of white gold,” said Alexis Nelson, the executive director of the Vermont Association of Snow Travelers, or VAST. “What a gift before the holiday season!”

The storm coincided with the opening of Vermont’s snowmobile season. Statewide, volunteers and riding clubs are now packing and clearing about 4,700 miles of trails, VAST said. They cannot rely on snow-making technology as many of Vermont’s downhill skiing destinations can, Nelson noted, so the snowfall is a big boost.

The trade group Ski Vermont said after a flurry of investments, snow-spraying guns now service 80 percent of the state’s slopes. However, ski areas will tell you they don’t want to rely on the machines; they want plenty of natural snow from the skies.

The combination is critical to Vermont’s tourism-dependent economy, and the more than $700-million that skiers and riders spend in Vermont in a typical season. “It lets us open up earlier, have better conditions longer, and stay open much later in the season,” said Ski Vermont’s Parker Riehle, describing the combination of natural snowfall and snow-making.

At the Catamount Outdoor Family Center in Williston, cross-country skiers were hitting the trails on the fresh snow Monday, making for a far busier start to the week than staff would normally expect. Catamount does not use any snow-making technology, though at least seven Vermont cross-country resorts have embraced the guns that were once only seen at downhill areas.

“It’s really great to come out on some nice fresh snow, some natural snow, rather than man-made,” said cross-country skier Patrick Carton of Essex Junction, Vt. “It’s a lot softer.”

This weekend’s storm, along with more cold temperatures and light snow in the forecast for Vermont, have given Alexis Nelson hope that it’ll be a good, long season for snowmobiling. “We’re hoping for lots of snow, and continuous cold temperatures,” Nelson said, describing her wishes for the rest of the season.

VAST said it has a new interactive trail map on its website, and a smartphone app coming out before the end of the month that will help snowmobilers identify trails and plan their trips across the state and region.